A microphone is one of the most important computer peripherals for someone that wants to make videos, host live streams, or record podcasts.

And it’s no surprise that people are creating and watching an exorbitant amount of online media recently! So, if you want to get yourself set up to create video content of some kind, or upgrade your existing audio arrangement, you’ve come to the right place. Let’s get into some recommendations!

No Gear and No Idea?

As any user of YouTube and Twitch can tell you, poor audio quality is immediately and highly noticeable. A common source of low-quality voice work is the built-in mic on a content creator’s  low-caliber headset.

Most viewers will be patient and understanding if visuals are slightly downgraded for the sake of streaming (though, admittedly, not as much for videos). But regardless of your platform, there’s less forgiveness for bad audio. This makes it all the more surprising that some folks don’t look into what makes a good audio setup in the first place.

Now, simply buying the most expensive microphone isn’t the be-all-and-end-all to a quality setup. While it’s important not to be suckered into buying an ultra-budget microphone that scarcely improves on a headset mic, price is far from the only factor to think about. Careful consideration of all technical details (including analog-to-digital conversion, monitoring options, power delivery methods, and control features for tone, gain, and more) must come into play. That’s why most of the options in this article are not USB microphones, but instead proper XLR microphones with accompanying audio interfaces.

We will be focusing on different setups at varying price points, but we will also be targeting really solid high-quality recording throughout. Regardless of if you’re just starting out or you’re looking for a major upgrade, our list should have a solution you can consider!

A Quick Note on Phantom Power

You’ll often see this noted as a requirement with certain microphones, but you may not know much about it or how it works. As you dive into specifications, you’ll also notice that different interfaces and mixers come can provide this mythical ‘phantom power’ too!

All this means is that the microphone has active electronic components which require their own power in order to function. When it’s required, it will usually be delivered through a cable that is doing other work for the mic, such as the XLR connection and/or USB connection where applicable. Essentially, if you’re using a condenser microphone, you need phantom power!

If you need phantom power and neither your microphone nor your mixer/interface comes with a means of satisfying that requirement, units like the Neewer 1-Channel 48V Phantom Power Supply are fine for single-mic setups. Just follow best practices by ensuring the power supply is not turned on when you’re plugging in or removing the XLR cable. Oh, and your sound quality will be improved if your phantom power comes before your microphone signal hits your mixing desk or interface (if you’re using a standalone phantom power and interface instead of an all-in-one setup).

In this example room, look at the the level of sound distribution; this is just from a single sound source in the corner of a room (perhaps from a desk speaker)

When it comes to sound insulation, it is not just a matter of buying a load of Acoustic Foam and calling it a day. Firstly, overdoing it will often make your voice sound very flat and dead. Having a little bit of reverb is good for a richer and more natural tone to your voice. Similarly, you can use tools like acoustic foam on areas that produce too much reverb.

The best set of acoustic software I’ve personally used is from amcoustics. The main utilities to use are amroc and amray (amray was used in the image above and below), as they will both tell you (1) where problematic frequencies are in play in your room (watch out for the nightmare of your country’s power frequency reverb), and (2) where there are reverb hotspots. Using tools like these, you can set yourself up to identify issues and reduce the more problematic sound bounceback.

The same example room, now with a single listening point (like, for example, a microphone) 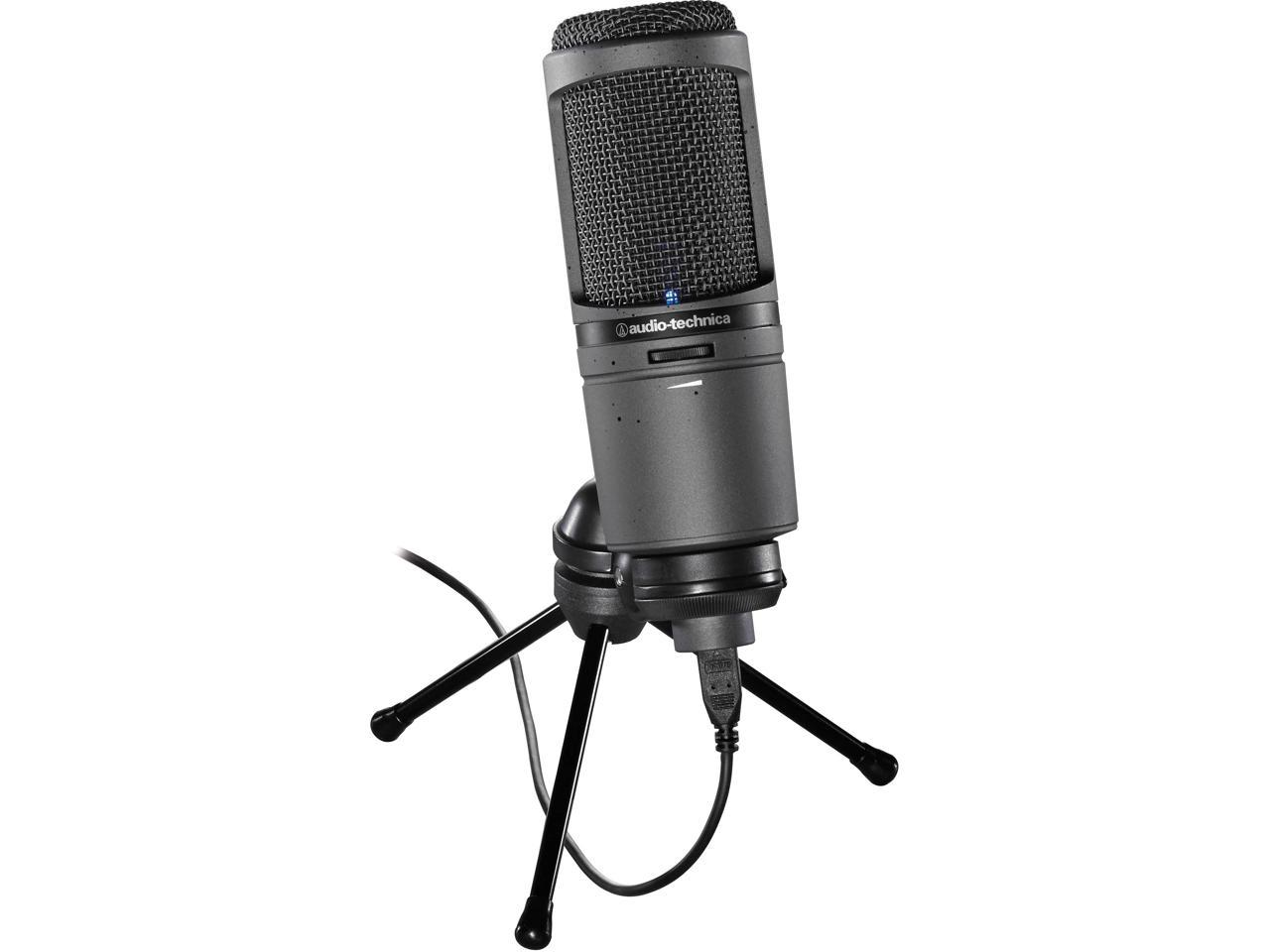 Alongside a couple other popular USB mics, the Audio-Technica AT2020 has almost become a rite of passage for aspiring streamers, video creators, and podcasters. While there is also an XLR model, the USB version is more popular thanks to the simpler plug-and-play style. Despite not being super expensive (as far as microphones go), it has very solid performance for voice frequencies, making it a nice choice for a decent first setup.

Alright, with one obligatory USB option out of the way, we can get into more complete setups. The rest of these options will use standard XLR microphone connections, and will be paired with appropriate audio interface choices to connect them to PCs (in this case, the really reliable single-input Focusrite Scarlett Solo).

The AT2035 is a nice upgrade to the AT2020 thanks to a -10dB PAD, as well as a high-pass filter and an overall louder signal output. When it’s paired up with the Scarlett Solo, the result should be a cleaner-sounding setup with lower background noise and interference.

Moving up here, we go for a “”budget”” microphone from Lewitt, which is starting to gain traction with podcasters due to its lovely rich speaking tones. Without being a bank breaker in the world of audio work, this large-diaphragm microphone has that classic radio vocal feel to its response. As such, it’s a great solution to those of you who are looking for a professional-sounding solution.

With the Presonus Studio 24C as its partner, we start to getting into more fine control over our sound—as well as added input/output options, allowing you considerable flexibility in a home studio. 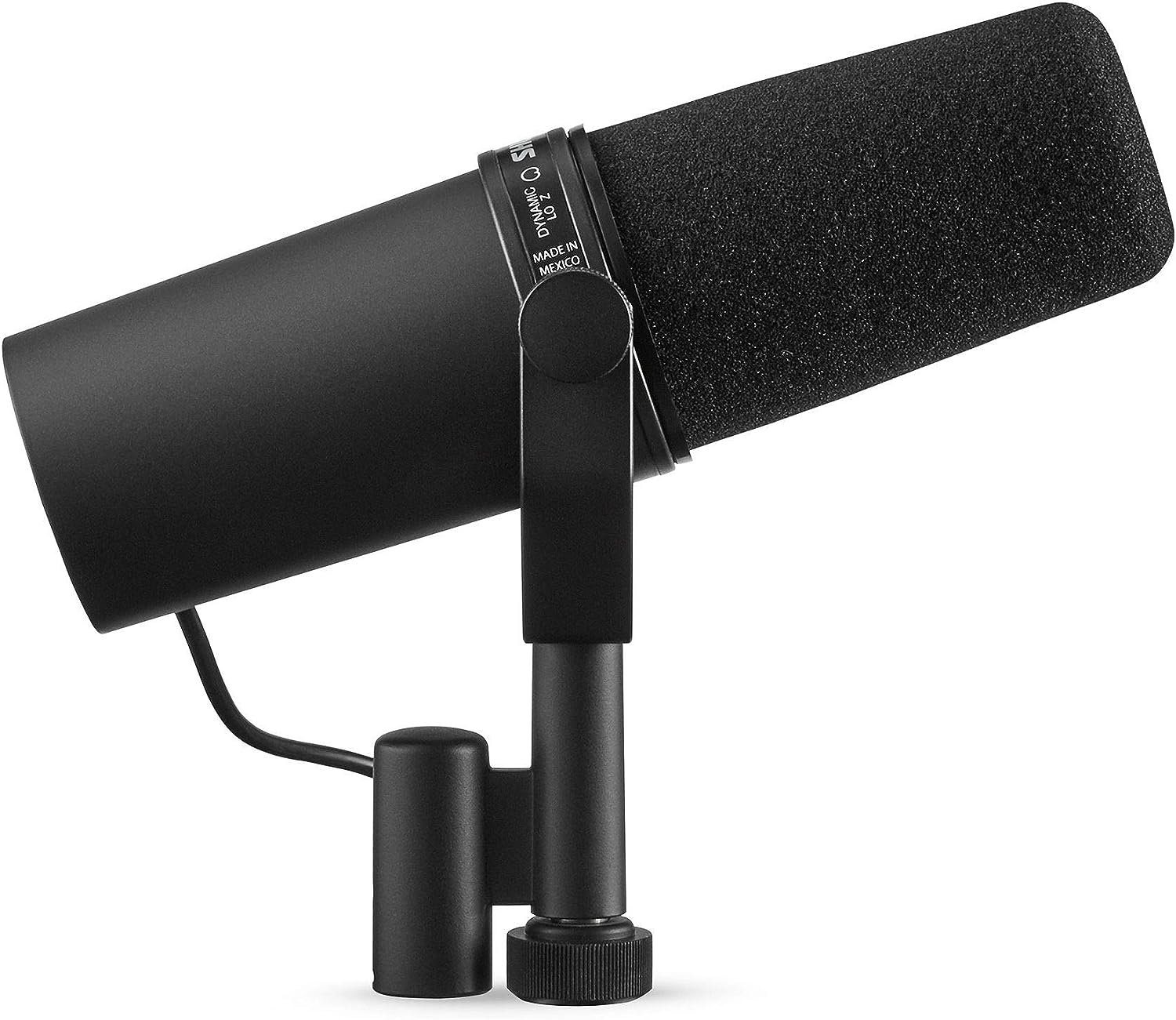 Ask pretty much any audio person what their go-to professional-grade studio microphone is relative to its price, and they’re likely to say the Shure SM7B if they’ve worked in the industry for any length of time. It hits a real sweet spot for high-quality sound reproduction for the cost. And thanks to it having a yoke mounting, you can precisely position the microphone to suit your needs.

We’ve coupled this with the very popular Audient iD4, which has a very quiet noise floor resulting in an excellent clean output to your PC. 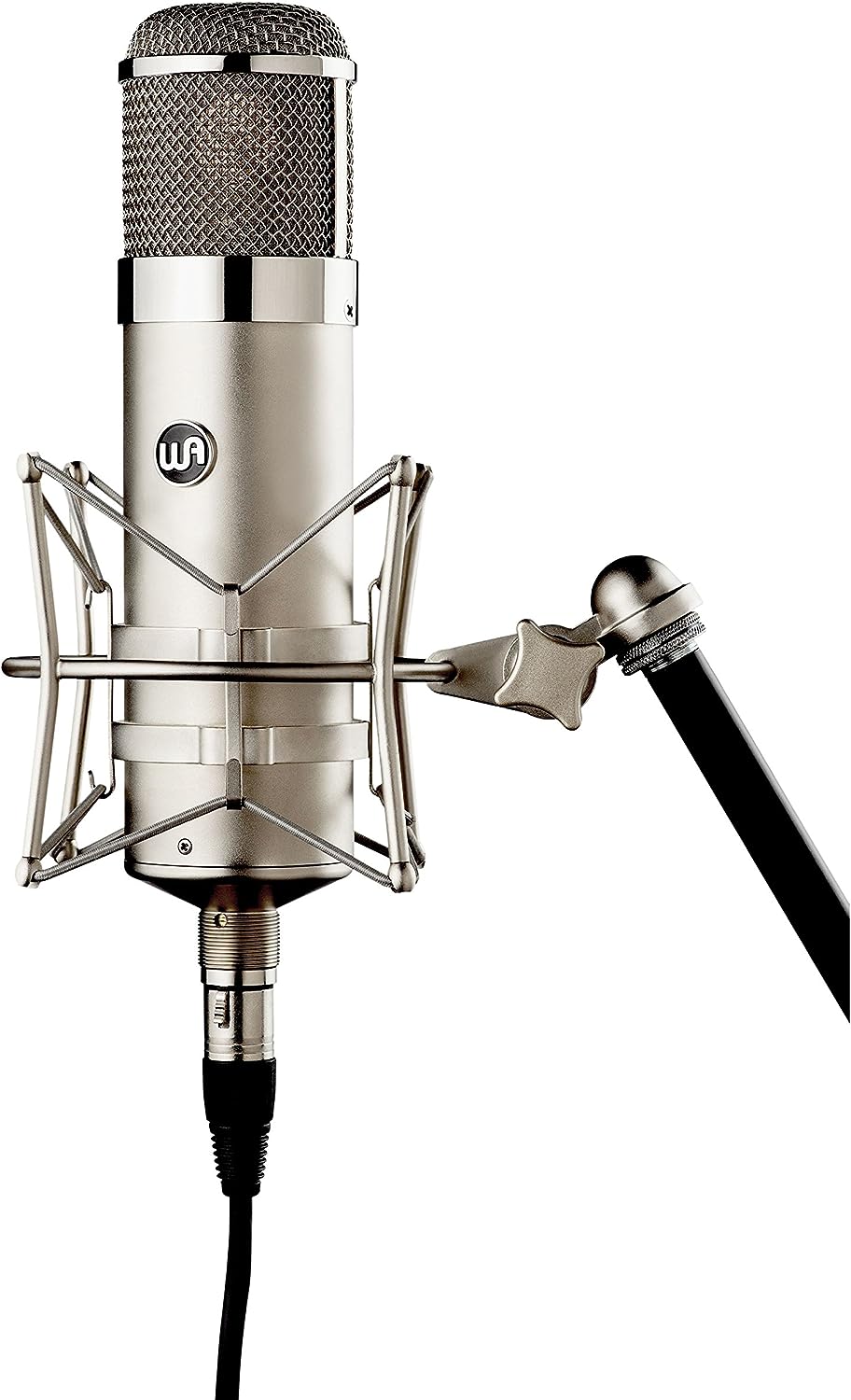 When money is less of an issue and you’re in pursuit of sound perfection, you can jump up to the Warm Audio WA-47. Designed to replicate the classic Neumann U47 microphone, the WA-47 does a supreme job in accurately capturing vocals. You’ll often hear folks waxing on about how sound isn’t a technical exercise—it’s the feeling you get from listening to the output… but technically speaking, this is an incredible piece of audio equipment.

We’ve paired it with one of the highest-rated interfaces on the market in the Apollo Twin. This comes with a phenomenal software package, which (even though the interface by itself is pretty much the best you can get for a small setup) can take the whole arrangement to its peak performance.

Just the Tip of the Iceberg

So yes, at this point we’re ending our little Top 5 microphones for YouTube and Streaming (and podcasters too). We’re stopping here because getting close to $2000 is a sensible maximum limit for most at-home professionals. However, don’t be fooled into thinking that’s the end of the game!

For instance, if you want a near replica of the U47 mentioned above, you can get your hands on the Telefunken Elektroakustik U47 for $9,000. And if you just fancy splashing the cash, a Brauner VM1S will set you back a brain-melting $11,000.

You’ll also find that interfaces start to take on a ‘rack mount’ style as you move up from the bracket considered in this article, just to allow for efficiency in professional studio setups. As such, they will all have multiple in/out connection options to accommodate an entire studio’s worth of equipment. You can look at things like the $5,000 Apogee Symphony I/O MK II to see the crazy money you’ll need to throw down with the big players!

Setting aside that nonsense, however, we’re hoping that this article has been useful for you!

Do you have your own favourite microphone(s)? Or interface(s) you prefer? Let us know your thoughts in the comments below!