AMD or Intel? It’s a question that comes up at every flagship launch… yet what if the flagship options are irrelevant to you, because you don’t want to spend a fortune on a CPU?

What if you just want to spend something more within a sensible budget, plug everything in, and get going? Well, the eternal debate can be invoked even at a lower price point! Let’s take a look at what both AMD and Intel have to offer around $200.

When looking at some of the products out there from both AMD and Intel, it’s amazing the performance you can get for your money now. This is especially true becase the stock is still moving out to people and retailers, despite a global pandemic. Not to mention, there are still more products releasing later this year!

First, we have Robert Hallcock (AMD Senior Technical Marketing Manager) confirming that Zen 3 CPUs are still on their way in 2020. AMD also have new GPUs—not to mention new game consoles running their architecture. Then there’s the new stuff coming from NVIDIA, and the possibility of Intel firing back at NVIDIA or AMD too.

However, today we’re setting the future aside, and simply looking at ‘value for money’ in the market here and now. The idea is to look at just out-of-the-box performance: the setups where (as much as possible) we’re just plugging in parts, letting it go with no overclocking, and seeing what the end result will be!

Well firstly, it might surprise folks to hear that not everyone likes to tinker in the BIOS or other software to achieve an overclock. They might be a first-time builder looking for an easy setup, or it could be someone wanting to walk their child through a build.

Bottom line, the CPUs around $200 are now the good jumping off point in these ‘native performance’ builds, just as dual-core CPUs were a number of years back. If you look at our main page, it’s this general CPU price point that dominates the $800-1200 midrange build sweet spot.

Having a look at the current systems out in the wild, 4-core systems are amazingly still the current standard (at least with Steam users). But 6-core systems are well on their way to becoming the new standard, if you’re looking to get ahead of the curve for processors without breaking the bank.

Steam Hardware & Software Survey was a big influence for this comparison.

As we’re looking at some of the data that Steam provides, it might surprise you what many people are still using and playing games with. What’s interesting in this data set is that they are not all super-fast, current-generation pieces of hardware. So if you are someone looking to upgrade on a budget, this comparison might be useful for you too, even though we’ll be focusing on newer components.

We’ll choose two winners from among our options, in each of two key categories: gaming and productivity.

AMD have rapidly gained popularity and market share, thanks to the performance of chips like the Ryzen 5 3600.

For Intel, we are bending the constraint by splitting the difference with the i5-10400 and i5-10500 ($180 and $230). Both of these are 6-core/12-thread CPUs, with the only difference being the clock speeds. Also, these processors are locked, so even if you wanted to do so, you can not overclock with either of these particular chips.

(It is worth noting that, with all 4 of these CPUs, the prices do tend to fluctuate up and down about $20-60 weekly or even daily, so—regardless of what you end up choosing initially—keep an eye on the prices right up until your purchase date, as a deal could pop up that might change your mind! Furthermore, if you think we’re letting Intel ‘cheat’ in this comparison by considering a $230 option… keep reading.)

One of the things that is interesting to me as a builder is the different philosophies of the two companies across their motherboard chipsets and their CPUs. For AMD, it’s more of a tinkerer’s dream setup. Everything available to be overclocked, everything with a mountain of cores and threads, go nuts. Intel is a bit more nuanced or specialized, tending to only allow overclocking on more expensive motherboards as well as more expensive chips, and often favoring blistering per-core speeds over multitasking capabilities.

For building a 3rd-gen AMD PC, there’s really only one logical choice for new buyers, and that’s the B550 motherboards. These start at around $80 for the ASRock B550M-HDV and go all the way through to $300 or more with the likes of the Gigabyte B550 AORUS MASTER. This is mainly because the range is designed to cover essentially everything from entry-level to the top-tier CPUs, with only X570 competing at the higher end.

For Intel, things are a bit tougher to figure out. We’re going with the H470 motherboards here (reasons int he next paragraph), which start at around $90 for the ASROCK H470M PRO4 and go up to around $180 for the Gigabyte H470 AORUS PRO AX. Again, the smaller stack here makes sense because you’d only really be pairing these with entry- to mid-level non-overclocked CPUs from Intel.

For overclocking, you’d need a 490 motherboard. But as mentioned earlier, these come at a premium and the Intel CPUs we’re looking at cannot be overclocked, so we’re removing Z490 from consideration. This leaves us with H470, B460, and H410. Here, the B460 is more of a business-orientated board; it comes with RAID support (unlike the H410) and another 10 PCIe lanes over the H410’s baby 6 lanes. Limitations like those few lanes and no support for Intel Optane remove the H410 boards from the running—they’re simply too limiting, and don’t give enough upgrade potential. For us, the H470 is the better option. It comes with 20 PCIe lanes, WiFi support, and 4 USB 3.2 Gen 2 ports.

This is super fascinating, and it all comes down to your budget for the whole build. Outside of the slight motherboard differences above, the rest of this comparison assumes you’re going with 16GB RAM, some decent storage, and a sensible midrange GPU (something like a GTX 1660 Super).

On the two locked Intel CPUs, the performance in gaming is essentially the same. So we would lean more toward the i5-10400, as there doesn’t seem much point paying the extra $50 for the 0.1GHz difference.

Yet, can you get all the gaming performance on the lowest budget? Well, as it happens, yes, you can. Intel can only match the bigger brother in the Ryzen 5 3600 if you buy a more expensive motherboard that supports higher memory speeds. The catch-22 here is the budget boards we would recommend… do not. So you need to spend more money to get a more expensive motherboard, with other features you won’t use, just to be able to run faster RAM or even overclock the memory—at which point you’ve lost the lower price point. Not to mention the plug-and-play simplicity.

Therefore, if the build is for gaming around this level, it comes down to just AMD as the viable budget option. But which one?

If you’re wanting to future-proof yourself, get the Ryzen 5 3600 as it has more cores. If you’re just wanting to get your gaming system up and running right now for the lowest price (the future is only a problem for ‘future you,’ after all), get the Ryzen 3 3300X because it will generally match the 3600 in games that can’t utilise those extra cores. And for now, most games can’t really take advantage of more than 4 cores. 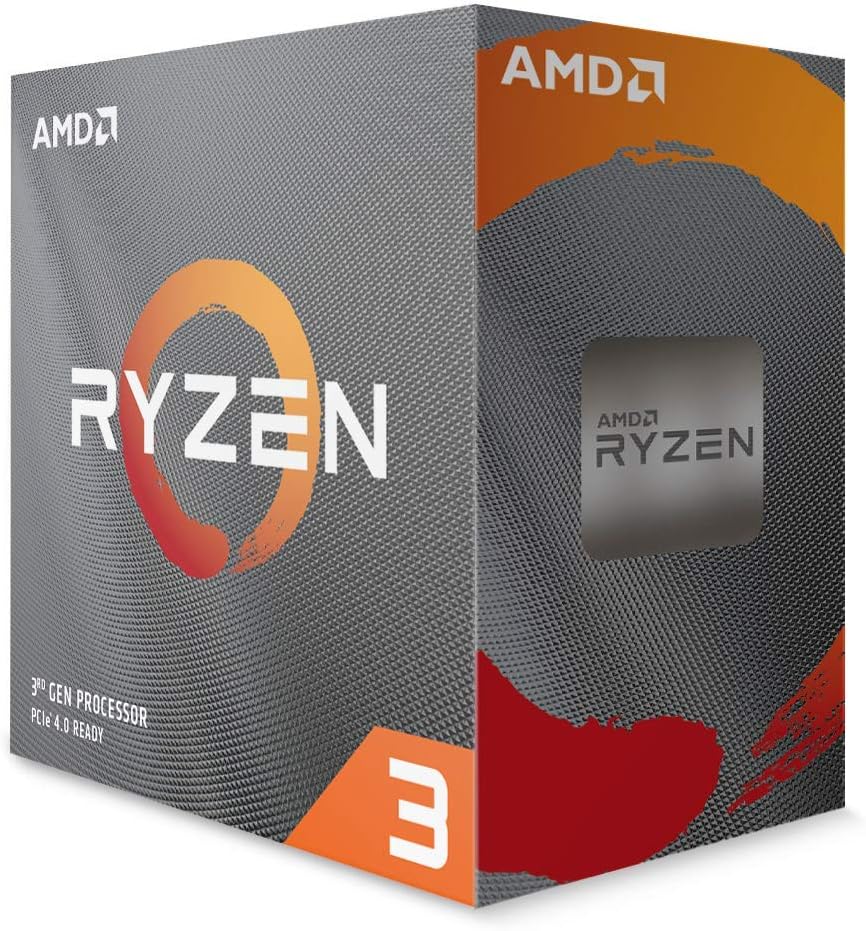 Is this a shocking victory? No need to be surprised! For $120, you’re getting some serious bang for your buck here. The reason it can match the 3600 despite having less cores is both its higher out-of-the-box boost clock of 4.3GHz (versus 4.2GHz on the 3600) and having all of its cores on a single CCX node. This is super important for Ryzen, as it drastically reduces data transfer times between the cores when compared to the multiple CCX layout, and allows the cores to have a unified access to the large L3 cache.

The R3 3300X won’t quite stack up to two Intel options in this article across all metrics and games, but we’re talking about single-digit frame rate differences in some titles for between $60 and $110 less—and the Ryzen CPU is even slightly ahead in a few games! The savings in the CPU column from making this choice can either be put elsewhere in the build, or kept in your pocket.

For years, trying to make a viable workstation build on a budget had been an impossible task. We only have to go back a couple generations to see anything higher than 4-core CPUs being the exclusive home of the Intel Extreme platform, which would set you back thousands of dollars. Who else here remembers dreaming about having the money to throw $1000+ at an i7-6900K in 2016? I was personally super lucky to be able to build a student editing build back in 2017 with the shiny new Ryzen 7 1700X.

However, those larger CPUs are out of our budget for this article by a fair distance. We’re looking at productivity and multi-tasking on a budget.

Firstly, we say goodbye to the Ryzen 3 3300X here. Although it does have mighty performance for a 4-core CPU, we’re looking at trying to squeeze as much performance for various workstation tasks as possible.

Yet, what about the Intel CPUs? Well, like the gaming discussion above, you’re going to be hard-pressed to see the boost difference between these two Intel chips, so we’ll be (once again) leaning on the i5-10400. There just doesn’t seem much point paying the extra $50.

To be honest, I don’t think this will come as much of a surprise to anyone. In the various benchmarks which have been conducted comparing these two CPUs in particular since the Intel chip launched, the Ryzen 5 3600 has beaten the Intel offering with anywhere from 5-20% improved performance in productivity applications like Photoshop, DaVinci Resolve Studio, Blender, and compression/de-compression speeds.

What’s more, if you find yourself wanting to game after you’ve been working (like me), you’ll be happy to know that it still matches or beats the i5-10400 at this budget level, thanks to the Intel CPU only having access to 2666Mhz RAM on anything outside of the more expensive motherboards.

The takeaway here is that AMD are continuing to stay ahead, especially at and below the midrange market segment.

All the way through their product stack, AMD are giving budgetary flexibility. The level of change they have brought over the last 3 years is pretty wild to step back and consider, and they’re showing no signs of slowing down right now; outside of a few high-end flagship choices, Intel are struggling to even make their options seem viable.

And AMD has let that huge jump in core count and performance run all the way down their product stack, meaning that those of us on tighter budgets have seriously powerful CPUs available in the R3 and R5 lineups.

What will be interesting is whether Intel finally manages to solve its 7nm production process, or if they even bite the bullet on the R&D costs and go straight for 5nm. Either way, the last update from Intel on that subject was to expect news in 2021.

So at least until this time next year, it looks like AMD will continue to rule the roost.