Posts in Category: how to

We’re often asked: When is the best time to build or upgrade your PC?

In the U.S., the best time to buy new PC parts is Black Friday and Cyber Monday. Outside the U.S., you may do better with the next best: holiday season sales.

And while some might find excitement in the classic Black Friday imagery of shoppers camping out and then making a mad scramble for the electronics department, we at Logical Increments prefer to stay at home and capitalize on mega discounts the more civilized way: Glued to the internet, mashing F5 on our browsers and searching for the best deals.

We recently posted a new video on our YouTube channel about CPUs and how to find a good one. It’s the first video in a series explaining the various components of a PC. The goal is to give people a slightly deeper understanding of each component, and give some practical advice on how to pick out the right components for you. 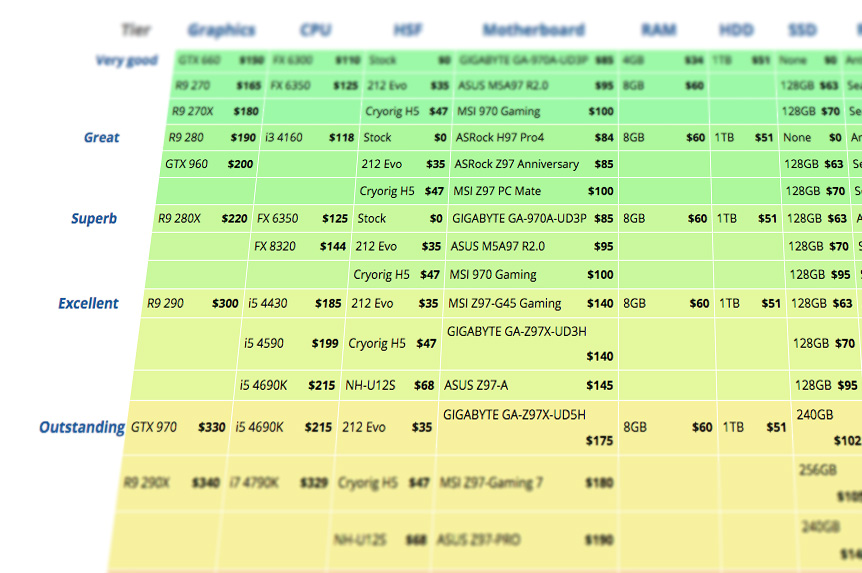 Over the years, Black Friday and Cyber Monday have made this the best time of year to be a PC builder.

And while some might find excitement in the classic Black Friday imagery of shoppers camping out and then making a mad scramble for the electronics department, we at Logical Increments prefer to stay at home and capitalize on mega discounts the more civilized way: Glued to the internet, mashing F5 on our browsers and searching of the best deals. When’s the best time of the year to buy computer components for a build? Black Friday? Christmas? May?

The best time to buy PC parts depends a lot on where you live. Video editing PCs are not like your typical gaming build. Though they share a lot of components, this type of build requires more of focus on processing and quick storage over sheer graphical horsepower. The following PC build should serve the purpose of photo and video editing very well, and would even perform 3D modeling much better than your average computer. Please note that we will focus on having reasonably-priced components, instead of recommending best-in-class items that not everyone can afford. There’s lots of reasons to build your own computer but the main 2 are so you can give it the performance you want it to have and to save money. But building a rig for the first time can be an intimidating prospect. All those parts! All that electricity flying around! All those weird terms like “form factor” and “SSD” and “PCI Express 3.0 x16” that have increasingly occupied your mind ever since you first floated the idea of upgrading your computer! You start to wonder why you tried this and didn’t just go to a computer recycling site instead. It’s a lot to think about – and a lot to buy. Here’s a short guide on how to get started and keep things as simple and stress-free as possible.