We have compared AMD’s flagship Ryzen 7 1800X CPU against Intel’s spec-equivalent, the i7-6900K. We have also written a long Ryzen 7 update to the Logical Increments website here. 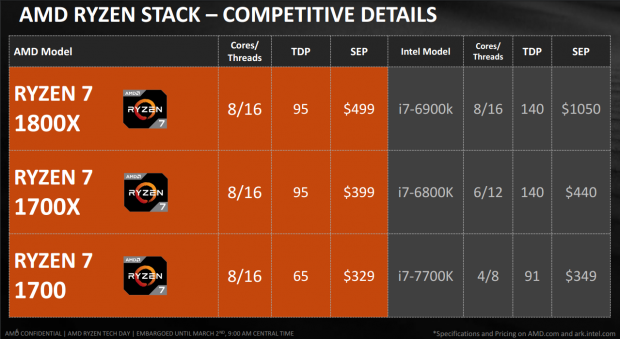 Not many reviewers talked about the 1700X specifically, but there are some good reviews from KitGuru and a YouTuber called MindBlank Tech. Both were able to achieve decent overclocks on the CPU at 3.9-4.0 GHz stable, bringing it to around the performance level 1800X.

KitGuru showed some non-gaming benchmarks, where the performance of the 1700X was close to expected: Very impressive in multi-threaded and well-optimized applications, but falling behind in single-threaded and Intel-optimized workloads. 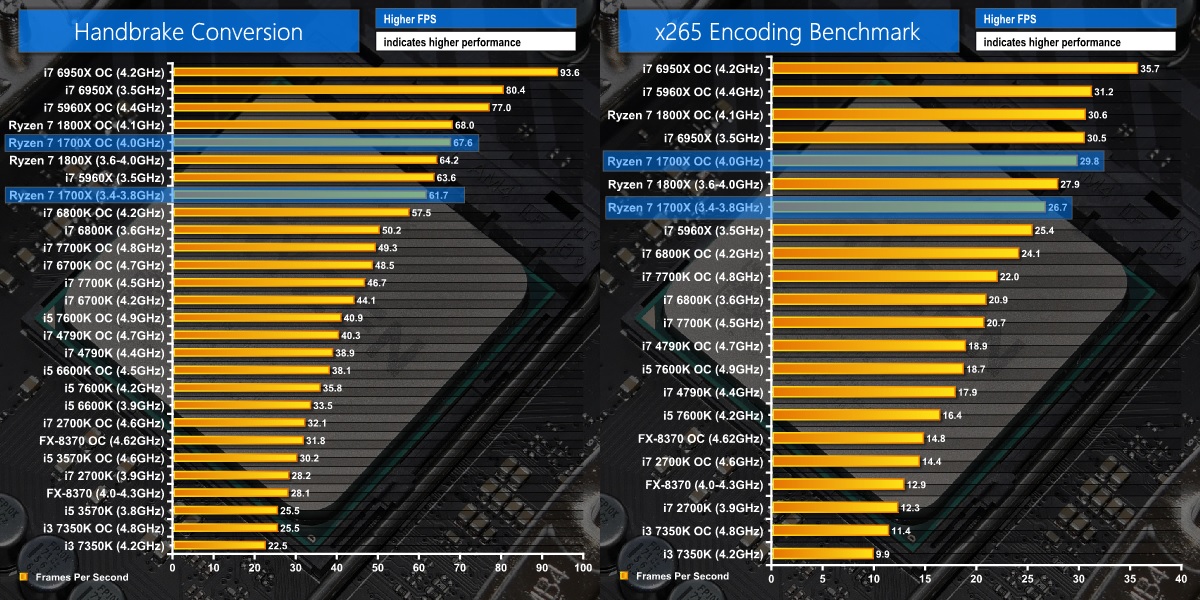 In well-optimized multi-threaded benchmarks, the Ryzen 7 1700X performs noticeably better than both the i7 6800K and 7700K, falling behind only to the Intel’s Extreme-series processors and the overclocked R7 1800X. Source: KitGuru

In single-threaded applications, the 1700X, just like the 1800X, falls quite behind Intel’s offerings. This will hopefully be fixed with upcoming motherboard BIOS and Windows updates. Source: KitGuru

Gaming benchmarks from both KitGuru and MindBlank Tech showed results similar to the single-threaded tests shown in the picture above, with the Ryzen CPU falling behind many cheaper Intel alternatives, even when overclocked.

MindBlank Tech, however, also tested games with AMD’s simultaneous multi-threading disabled (SMT is equivalent to Intel’s hyperthreading), as well as ran a few games on Windows 7 and showed some interesting graphs with framerate bell curves. This is a great way of identifying microstuttering in games and getting a better understanding of how much the framerate actually varies in-game. 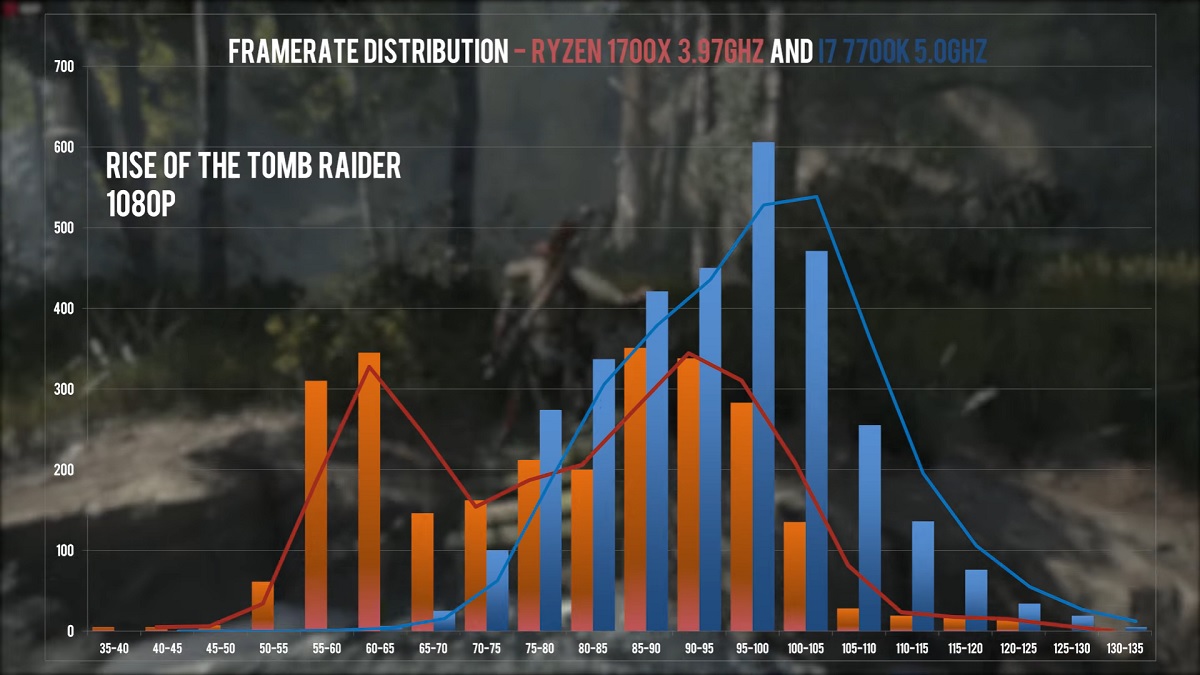 With Rise of The Tomb Raider, for instance, we can see how with the AMD Ryzen CPU we have two peaks and a much wider bell-curve, meaning the framerate fluctuates much more than with the Intel CPU. Source: MindBlank Tech

The DOOM graph shows beautifully how a bell-curve can represent framerate variability. The Intel CPU ran the game in a more confined framerate space than the Ryzen CPU, where it fluctuated in a much wider range. Source: MindBlank Tech 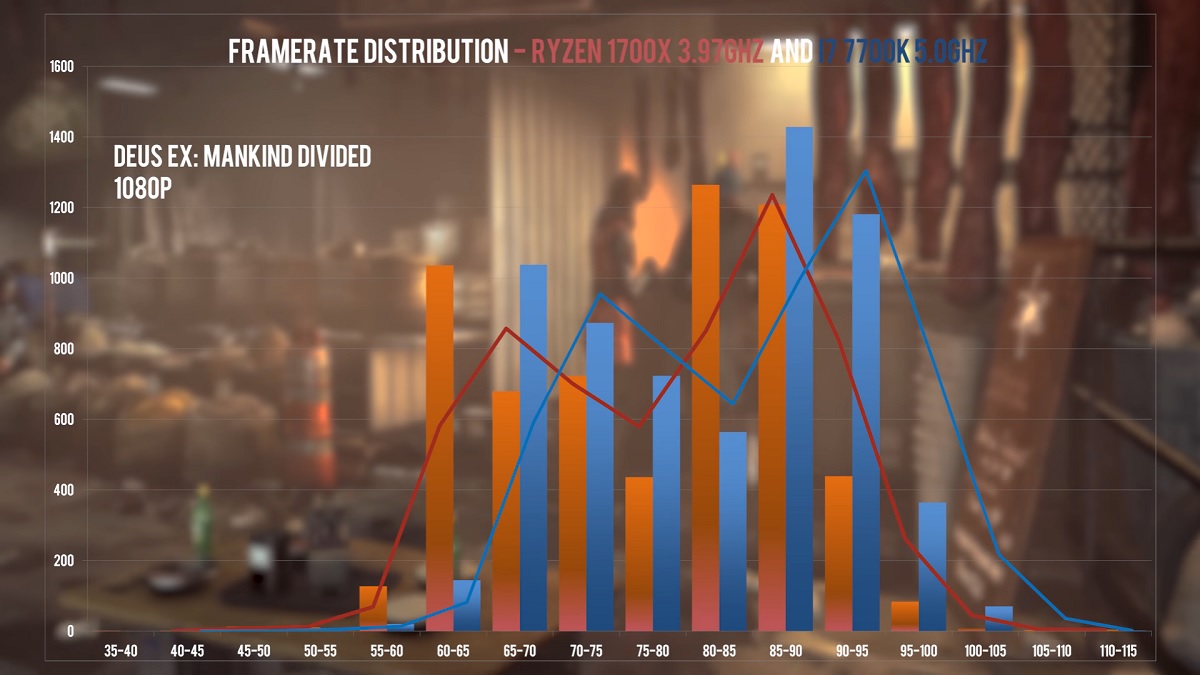 With Deus Ex: Human Revolution we can see how the game in general isn’t a very good benchmark with the framerate variability having two peaks on both systems, meaning the framerate fluctuation is more engine-based than anything else. Source: MindBlank Tech

In the end, the Ryzen 7 1700X is just a slower 1800X out of the box. In reality, both of these CPUs seem to overclock similarly, and if you have a good CPU cooler, then there is little need to choose the more expensive 1800X over its cheaper little brother.

For multi-threaded and well-optimized productivity, the 1700X is a no-brainer over Intel’s i7 7700K and 6800K, arguably even the $1000-dollar behemoth 6900K. We can also recommend the R7 1700X for mixed workloads, like gaming and content creation, as the value of an AM4-based system is much higher than that of an X99-based one, arguably even a Z270-based 7700K system too.

For purely gaming, on the other hand, we would still recommend the higher clocked Kaby Lake i5-7600K and i7-7700K. Considering some ongoing issues with AM4-based chipsets, as well as games still being optimized for higher clockrates instead of multi-threaded workloads, this does not favor the Ryzen CPUs.

For content creation (with some optional gaming): Get the 1700X.